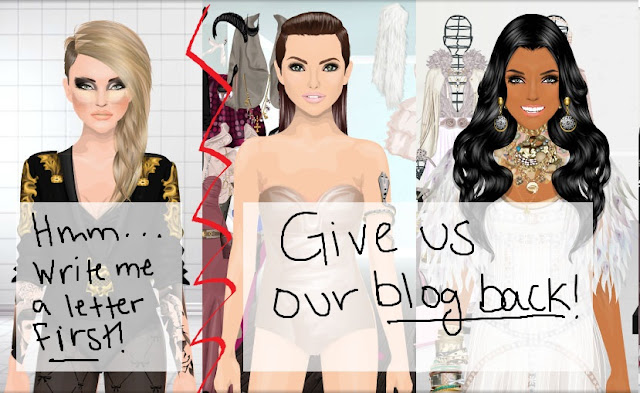 Memoires Of A Medoll is seriously having some baby mama drama right now. Previous owner Noelle_Page is all like "Let me see my child!" and the new owner AislinVictory is like "Oh hell naw, I ain't about that life. You ain't just about to walk up to me 10 years later asking to see your child for the first time. Get lost, I want an explanation first!" Who knew we'd be dealing with baby mama drama here on Stardoll.

So obviously they aren't fighting over a baby. The founders of Memoires Of a Medoll Noelle_page, and Isabella.Arci appear to be extreme upset with the current owner(s) Aislinvictory, and To_Royal. Co-founder Isabella.Arci was talking with the Eliteprotect in her guestbook and revealed to us that she can't access the blog. 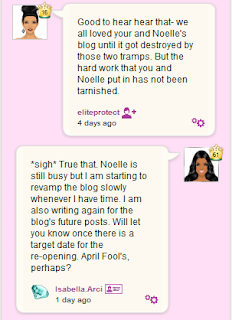 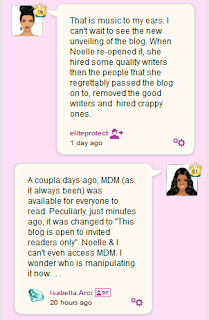 So as of a few days ago Isabella.Arci was 'planning' on revamping MDM, until she found out that she couldn't access her own blog. It appears that both Isabella.Arci and Noelle_Page were removed from their own blog MDM. Being that I'm friends with both the owners of MDM I found out that To_royal was also removed as a admin leaving Aislinvictory the sole owner. 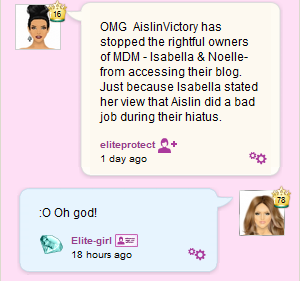 Eliteprotect made sure everyone knew that Aislin 'stole' MDM from the rightful owners, by going guestbook to guestbook spreading the word. That next day when Aislin logged on, she made the blog accessible to all viewers and made a post explaining her actions. She also said, "... I will not add either of them back until I receive and explanation from Noelle. I believe that I deserve that much." So basically if Noelle and Isabella want the blog back they'll have to talk to Aislin. A friend of mine spoke to Isabella via stardoll chat and Isabella said something along the lines that she doesn't owe Aislin a explanation. Noelle and herself are the founders of MDM and deserves access to their blog.


Does Aislin deserve a explanation, or should she just give the blog back?

My oh my, I never thought I'd see the day come when Stardoll's King of Media would be making it's return. I'm very excited to say that your once favorite gossip blog is back! I'd say I've grown a lot since retiring from gossip blogging. Yes, I'm still that girl getting in tons of fights. But I can't help it that people are jealous of me, I'm just so fabulous*flips hair*. Anywho, back to the real reason you're reading this post full of sarcasm which may not read through the computer. I truly miss what Stardoll once was. I miss the great times we had in 2008, and 2010. I like to think of those years as our 'Golden Years', fabulous right? In 2009-2010, we were experience pure boredom which we're sort of experiencing now. Stardoll's Most Hated (Before Hurricane Jack) wasn't active at all, and that is when KOM was born. This blog was part of the movement(a movement which brought Stardoll's Fashion Week, Bad Media Karma, numerous magazine releases, and tons of unimportant anonymous blogs) to bring life back to Stardoll. The main reason I'm returning is because I've been seeing a lot of recent gossip just being swept under the rug and I just want it all out on the table for us to enjoy!

Well, I don't want to bore you with my reasons of returning to Stardoll's King of Media. I'd rather talk about how fabulous I am, but I think I'll do that another day. See you guys on the 'flip' side!


Before you go, it seems like these bitches want to give me some competition? Who wins this hair flipping war? Hayden Panettiere, Nicki Minaj or New York?

Email ThisBlogThis!Share to TwitterShare to FacebookShare to Pinterest
Labels: 2013, Return 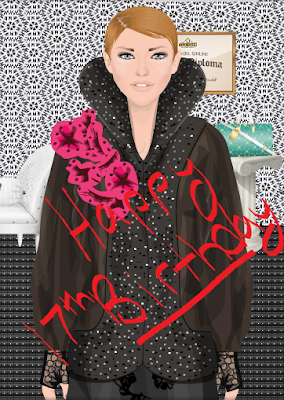 Let's give my great friend Manolo.DiCicco a "HAPPY BIRTHDAY!" because today he turns the big one-seven(17).

What better way to celebrate than a little bit of Birthday Cake. 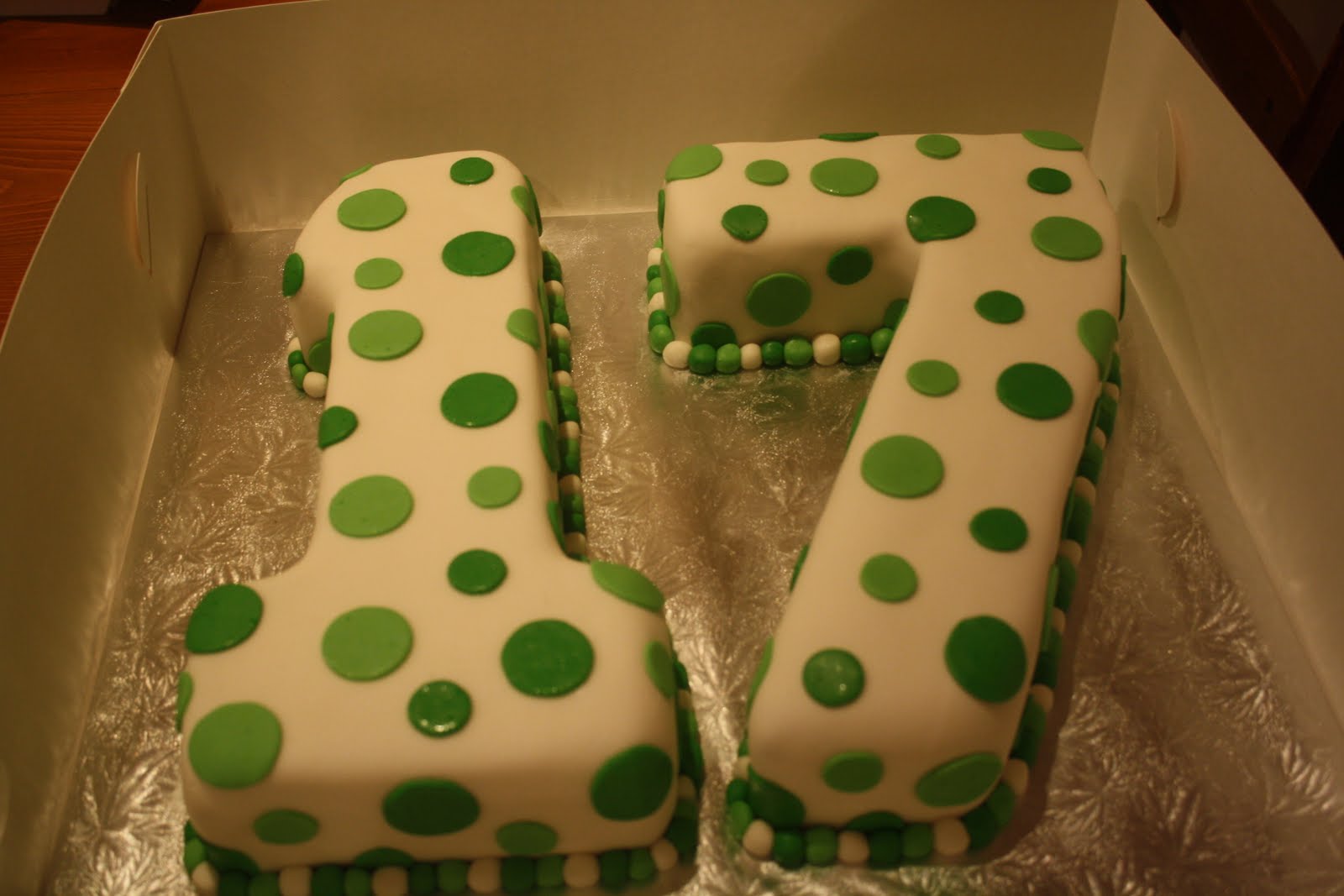 No silly, not an actual birthday cake! The song Birthday Cake by Rihanna!

Posted by Linda/Elite-girl at 10:07 PM No comments:

Email ThisBlogThis!Share to TwitterShare to FacebookShare to Pinterest
Labels: manolo.DiCicco

Stardoll's King of Media correspondent has a very import announcement to make!

We here at Stardoll's King of Media will always love you Tyler! Follow him now on keek @TyPetersen

Email ThisBlogThis!Share to TwitterShare to FacebookShare to Pinterest
Labels: Tylerisbold 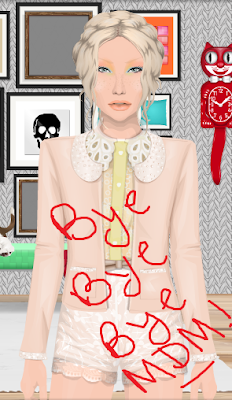 If you haven't notice Memoires Of A Medoll has been very inactive lately. Is it time for yet another notorious Stardoll blog to call a quits?

Recent decisions for adding trial writer has really upset co-administrator AislinVictory. The decision was made without her input or approve and she feels she should've been included. She shared her feelings in her recent post and has express her wanting to leave the blog. I haven't a clue why she seems so blindsided by the hiring of these trial writers. To_Royal did make a post titled "I want trial writers" which if she check the blog she could've easily spoken to Deidra to put a stop to it or just voice her opinion which from experience I know does it well.

Is MDM coming to it's end? In the recent months Aislin and Deidra have taken the blog under their wing after owners Noelle_page and Isabella.Arci became inactive on Stardoll once again. The blog is a pale in comparison to what it once was when under the administration of Noelle almost a year ago. The blog was a lot of fun and I'm sure you'll all agree! Just a year ago the blog average about 40-45 post a month. Now the blog averages about 10. I personally do not think either Deidra or Aislin are in the position to administrate the blog. I do like them a ton, contrary to our current relation I feel them being older women on Stardoll, they're great role models.

I understand we all have real lives outside of stardoll, but a post every other day wouldn't kill your social life.


Gosh this video brings back so many childhood memories!

Is it time for MDM to throw in the towel like PSG?
Posted by Linda/Elite-girl at 5:21 PM 3 comments: 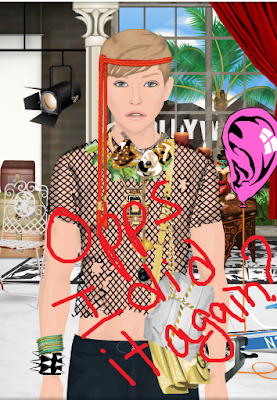 (Oh-my, this outfit is...)
I know you all rushed here in hopes of seeing this kid naked, again. Luckily we won't have to endure such tragedy. You all know Tylerisbold, right? Well he is an old friend of mine, up until I bashed him in numerous post for being a butt hole(check out his KOM folder!). He has been absent from Stardoll for the pass few months or so but has returned and brought us a little gift!

This blonde hair, blue eyed beauty has join this site called keek.com. No he isn't prostituting(Sorry pedo, aka 50% of Stardoll) his body, but he did something even better! Reveal a secret!
Watch!

One last thing, Tyler, don't say I never did anything for you. *kisses*

Email ThisBlogThis!Share to TwitterShare to FacebookShare to Pinterest
Labels: Tylerisbold 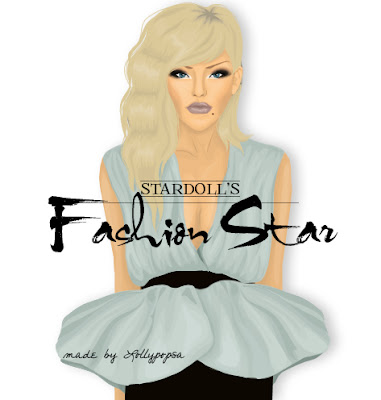 Do you aspire to be a fashion designer? Do you have sketches upon sketches in your sketchbook of model thin women wearing phenomenal clothing? Well great, this competition is just for you!
Stardoll's Fashion Star is a fashion competition that focuses on fashion design and is hosted Linda Pski (Elite-girl). Each contestant will compete against each other to great the best clothes and are restricted in time, and theme. These designs will be judged and one or more designers will be eliminated each week. The winner of this competition will be crowned Stardoll's Fashion Star, given 1,000sd, and many more!
Sounds great! If you're interested in what this competition is all about follow today: sdfashionstar.blogspot.com
Posted by Linda/Elite-girl at 12:45 PM 1 comment:

This blog is going to be reporting all Stardoll gossip. Stardoll's King of Media was established in the summer of 2010, and was part of a movement which brought excitement back to Stardoll. KOM went on hiatus for a few years but it's now making a comeback. Subscribe, comment, and enjoy the blog.